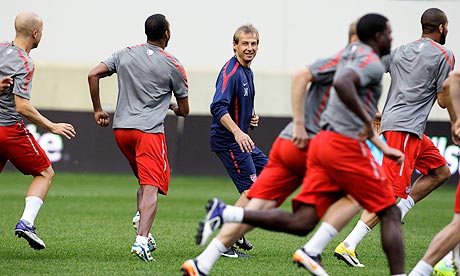 I’ve moved most of my video posts over to the facebook page, but this so interesting, full of such great ideas, that I had to post it here (where I hope more people will see it).

The video features US Men’s National Team head coach Jurgen Klinsmann discussing a training session he’s running.  It’s less than three minutes, so give it a watch.  I’ll explain some references and what he’s saying after the video, and then hopefully you can show it to your soccer-playing kids.

If the embedded video doesn’t work, here is a link.  He starts off describing the training session, where the squad is divided up into groups of 8 to play against each other.  In addition to having a full-size goal to score in, he has also put a mini-goal on either side of each goal, allowing the attackers to score in those as well.  The idea is to get the team, when defending, to shift from side-to-side as a unit, depending on where the play is happening.

But the best part is how he describes how the team as a whole defends, how they behave when the other team has the ball.  Everyone is involved in the effort to slow down the other team and win the ball back, from the forward at the top to the defenders in the back.

He says, “the reaction is if Wondo [forward Chris Wondolowski] loses the ball… to understand, am I connected or disconnected [to his nearest teammates]?”  He says that if the forward has lost the ball in a position where he has been pulled out, isolated, “disconnected” from his teammates, his first act should be to get himself back into a position where he is connected, with Teal [Bunburry, another forward] or Benny [Fielhaber, a central midfielder].

If the forward who’s lost the ball is connected to his central midfielders (in this example by having Benny five yards behind him) then those midfielders [Benny, or Kyle Beckerman or Ricardo Clark] need to call out to the forward that this is a good chance to chase the player with the ball, put him under pressure, maybe even challenge for the ball and hopefully get him to turn the ball over, whether with a wild pass or a tackle or misdribble.

How does a player find his space, figure out whether he is connected or not?  Klinsmann mentions instinct, but at the same time he offers another alternative–communication.  He mentions that when CJ [Sapong, the right winger/midfielder] gets pulled out of position, it is up to AJ [DeLaGarza, the right defender] or [Houston Dynamo] Geoff [Cameron, central defender] to call out to him to come back to his place and get “connected” with his teammates.

The important thing to note is that getting pulled out of position is not the problem, it is the natural result of trying to attack.  Rather, the problem is a failure to get back into position once the other team has won the ball.

Finally, watch the segments where there is footage of the players scrimmaging with no voice-over.  The players are talking, A LOT.  This communication is vital to being able to play the game as a team.